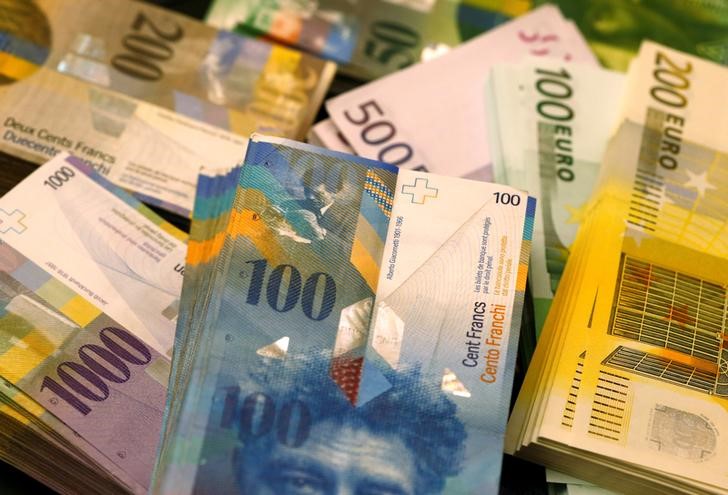 © Reuters. FILE PHOTO: Swiss Franc and Euro banknotes of several values lie on a table in a Swiss bank in Bern

LONDON (Reuters) – The Swiss franc and the Japanese yen rose against the dollar on Wednesday as a wave of caution swept currency markets a day after U.S. President Donald Trump tempered optimism over progress made in trade talks with China.

Carry trades, where investors borrow in relatively low yielding currencies to invest in higher-yielding ones, came under pressure with the euro/swiss franc () cross being singled out for special punishment.

While the dollar against a basket of its rivals () rose 0.2 percent to 93.76, it weakened 0.6 percent and 0.3 percent against the Japanese yen and Swiss franc respectively.

Stocks tumbled and the yen gained broadly after Trump said on Tuesday he was not pleased with recent trade talks between the United States and China, the world’s two biggest economies.

The euro was also pressured lower by concern over political risk in Italy. The single currency fell to a six-month low after German PMI data fell to a 20-month low indicating that economic momentum in Europe’s biggest economy was faltering.

The currency pair, a proxy for risk appetite within Europe, has fallen nearly 3 percent since May. 14 as concerns of a fiscally profligate new coalition government in Rome has raised concerns of a showdown with the European Union.

The likelihood of a government comprised of the anti-establishment 5-Star Movement and the far-right League has pushed Italian 10-year yields up nearly 60 basis points since the start of May. The bulk of that move has been over the past week. [GVD/EUR]

“The euro/franc cross encapsulates the growing risk premium that investors are placing on the euro in recent days and we may see further downside for now,” said Alvin Tan, a currency strategist at Societe Generale (PA:) in London.

Morgan Stanley (NYSE:) strategists said the euro’s recent weakness could prompt overseas investors to hedge their bond and equity investments in Europe, which could add further downside pressure on the euro.

The safe-haven yen also rose against other currency crosses and surged against the Turkish lira, amid talk of Japanese retail investors selling the lira as stop-loss levels were hit.

The yen tends to rise in times of market turbulence since Japan is the world’s largest creditor nation and traders tend to assume Japanese investors would repatriate funds at times of crisis.

Investors are now looking to the release on Wednesday of the Fed’s minutes from its most recent meeting, when it kept interest rates steady.

In its post-meeting statement issued in early May, the Fed also said inflation had “moved close” to its target and that “on a 12-month basis is expected to run near the Committee’s symmetric 2 percent objective over the medium term.”

Disclaimer: Fusion Media would like to remind you that the data contained in this website is not necessarily real-time nor accurate. All CFDs (stocks, indexes, futures) and Forex prices are not provided by exchanges but rather by market makers, and so prices may not be accurate and may differ from the actual market price, meaning prices are indicative and not appropriate for trading purposes. Therefore Fusion Media doesn`t bear any responsibility for any trading losses you might incur as a result of using this data.

Fusion Media or anyone involved with Fusion Media will not accept any liability for loss or damage as a result of reliance on the information including data, quotes, charts and buy/sell signals contained within this website. Please be fully informed regarding the risks and costs associated with trading the financial markets, it is one of the riskiest investment forms possible.