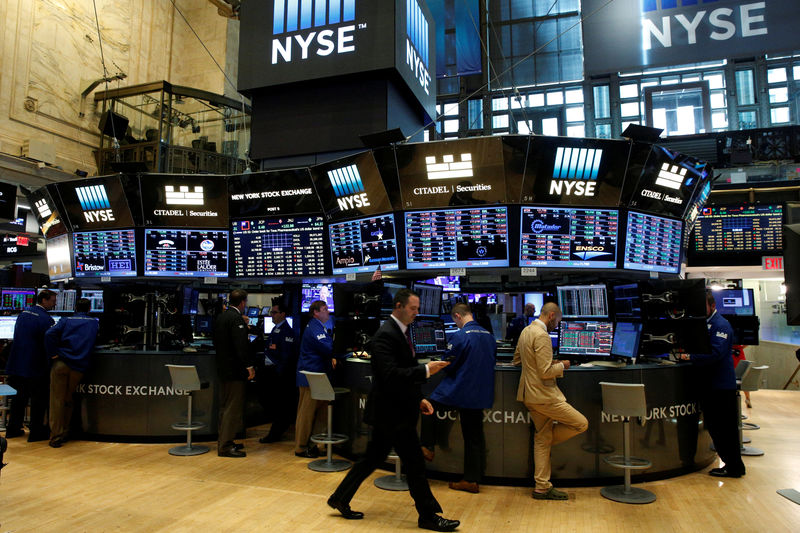 © Reuters. FILE PHOTO: Traders work at the Citadel Securities post on the floor of the NYSE

(Reuters) – Wall Street was headed to open lower on Wednesday after U.S. President Donald Trump cast fresh doubts over current U.S.-China trade talks and ahead of a Federal Reserve report that would be watched for cues on pace of future interest rate hikes.

Trump signaled a new direction for the trade talks, saying the current track appeared “too hard to get done”, a day after telling reporters that he was not pleased with the recent talks.

The latest uncertainty comes as investors prepare to assess the Federal Reserve’s May meeting minutes, scheduled for release at 2:00 p.m. ET, for indications of how many rate hikes are likely this year.

The U.S. central bank lifted borrowing costs in March and policymakers are split between those who expect another two rate hikes this year and those who forecast three, in the backdrop of low unemployment, moderate growth and rising inflation.

“Not only are the trade negotiations in focus but we also have the Fed’s minutes and I expect them to be hawkish,” said Peter Cardillo, chief market economist at Spartan Capital Securities in New York.

“A combination of the Fed and the trade worries will make today a rocky session.”

Lowe’s (N:) gained 4.4 percent after the home improvement retailer maintained its annual financial targets on expectations that demand will recover after a disappointing first quarter.

Disclaimer: Fusion Media would like to remind you that the data contained in this website is not necessarily real-time nor accurate. All CFDs (stocks, indexes, futures) and Forex prices are not provided by exchanges but rather by market makers, and so prices may not be accurate and may differ from the actual market price, meaning prices are indicative and not appropriate for trading purposes. Therefore Fusion Media doesn`t bear any responsibility for any trading losses you might incur as a result of using this data.

Fusion Media or anyone involved with Fusion Media will not accept any liability for loss or damage as a result of reliance on the information including data, quotes, charts and buy/sell signals contained within this website. Please be fully informed regarding the risks and costs associated with trading the financial markets, it is one of the riskiest investment forms possible.